The Buriat Republic was established in 1923. In 1992, it was renamed the Republic of Buryatiia, a republic within the Russian Federation. The republic is located in Southeast Siberia and borders Mongolia. Its capital is Ulan-Ude. Buriat is a Mongolic language.

The following is a beginning guide to bibliographic tools for researchers of Buriatiia. Though not comprehensive, this guide outlines three primary ways researchers can access bibliographic information about publications from Buriatiia:

Additionally, this guide highlights other resources regarding Buriat culture, history, and language. Researchers may also want to consult the following online database for additional coverage: Elektronnyi katalog knig na iazykakh narodov RF i stran SNG on the homepage of the the Russian National Library. This guide also highlights online resources – in particular Buriatika: Elektronnaia biblioteka, which has a select collection of digitized, full-text documents.

Sources: The Great Soviet Encyclopedia (Volume 4, page 195-6); the Official website of the Republic of Buriatiia; Ethnologue.

The National Library of Buriatiia is one of the best and oldest libraries in Siberia. It is located in the Siberian Federal District and serves as a major center of Buriat culture and information. The holdings of the library can be searched using its electronic catalog (e-catalog). While there is no specific period of coverage mentioned for this catalog, it is assumed to be reflective of the holdings of the National Library of Buriatiia (and other affiliated institutions). The catalog gives users options to search four different collections: books, articles, local history and periodicals. Users can also choose various types of searches, including standard, advanced and professional searches. Users can search by particular regional institutions (up to 13 different institutions), by UDK, BBK or theme. Users can also browse by alphabetical listings and by topics. The interface for the advanced search is shown below. 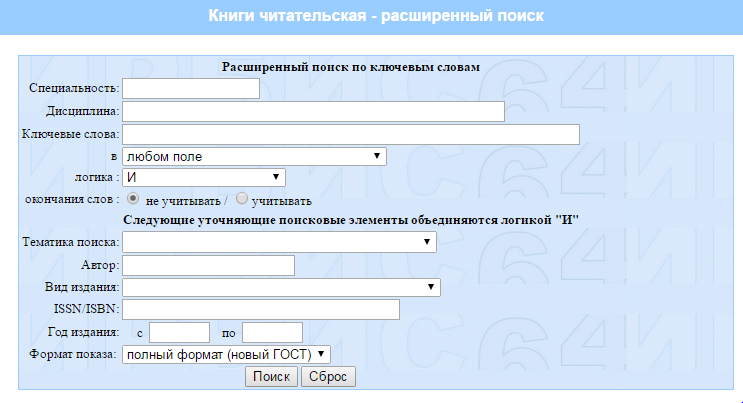 The search results give bibliographic information including the title, date and place of publication, ISBN, indicator, topic categorization, BBK, rubric, keywords, number of copies, and number of copies available. Users also have the option to see results similar to any given entry.

The Russian National Library’s Department of Literature in National Languages [also known as the Department of National Literatures] of the Russian Federation, Commonwealth of Independent States, and the Baltic countries has reproduced holdings catalogs in microfiche format. The national languages imprints catalogs in microfiche format diffuse most of the difficulties associated with transliteration in the vernacular languages, spelling, forms of entry, and uncertainties with the entirety of the collection. Researchers can access the entire holdings for a specific language at the Russian National Library through the microfiche set, conveniently exporting selected titles via PDF scans. The following scans reflect some of the Buryat language holdings available in microfiche format. As can be seen there are records in both Cyrillic and in classical Mongolian script. 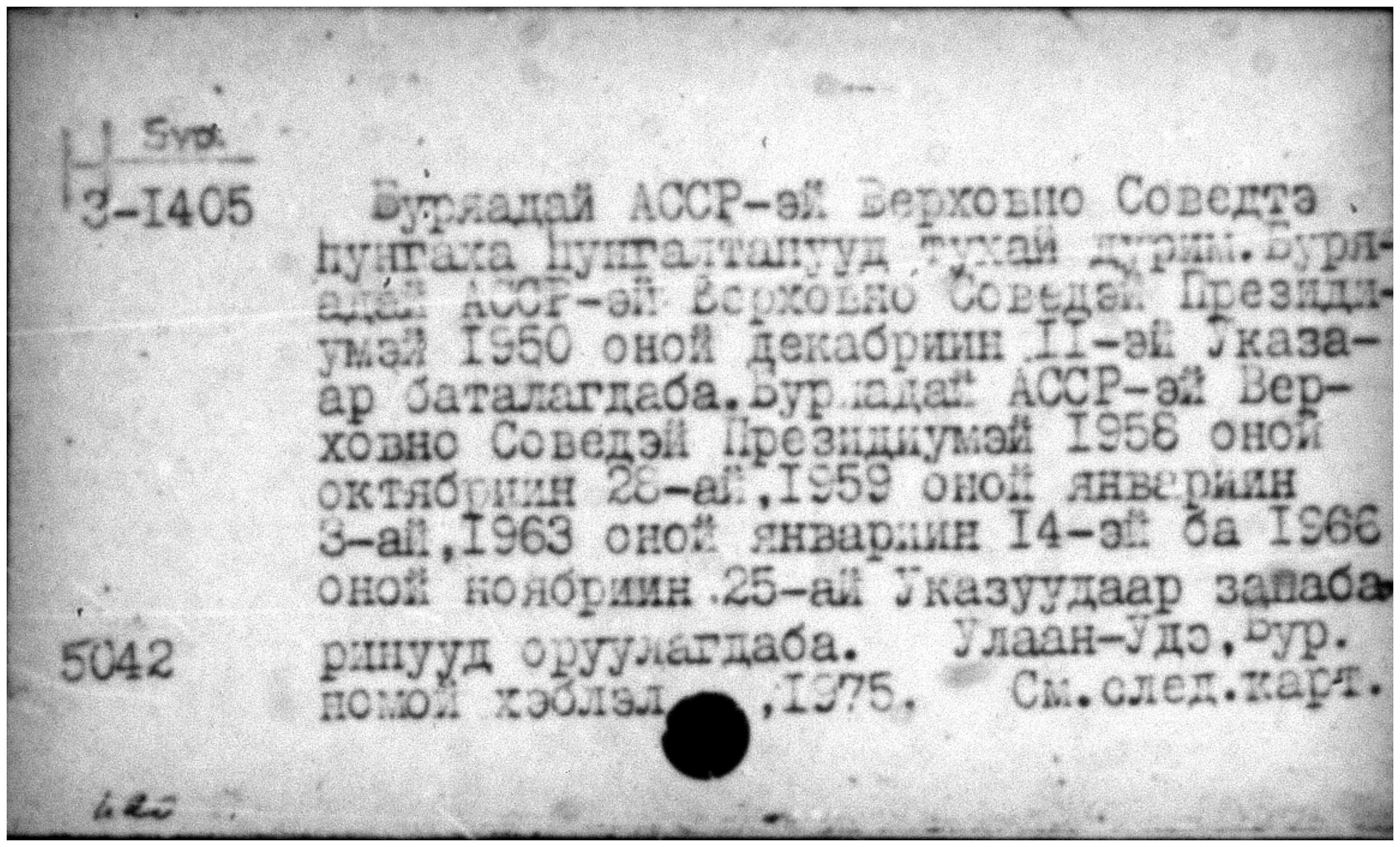 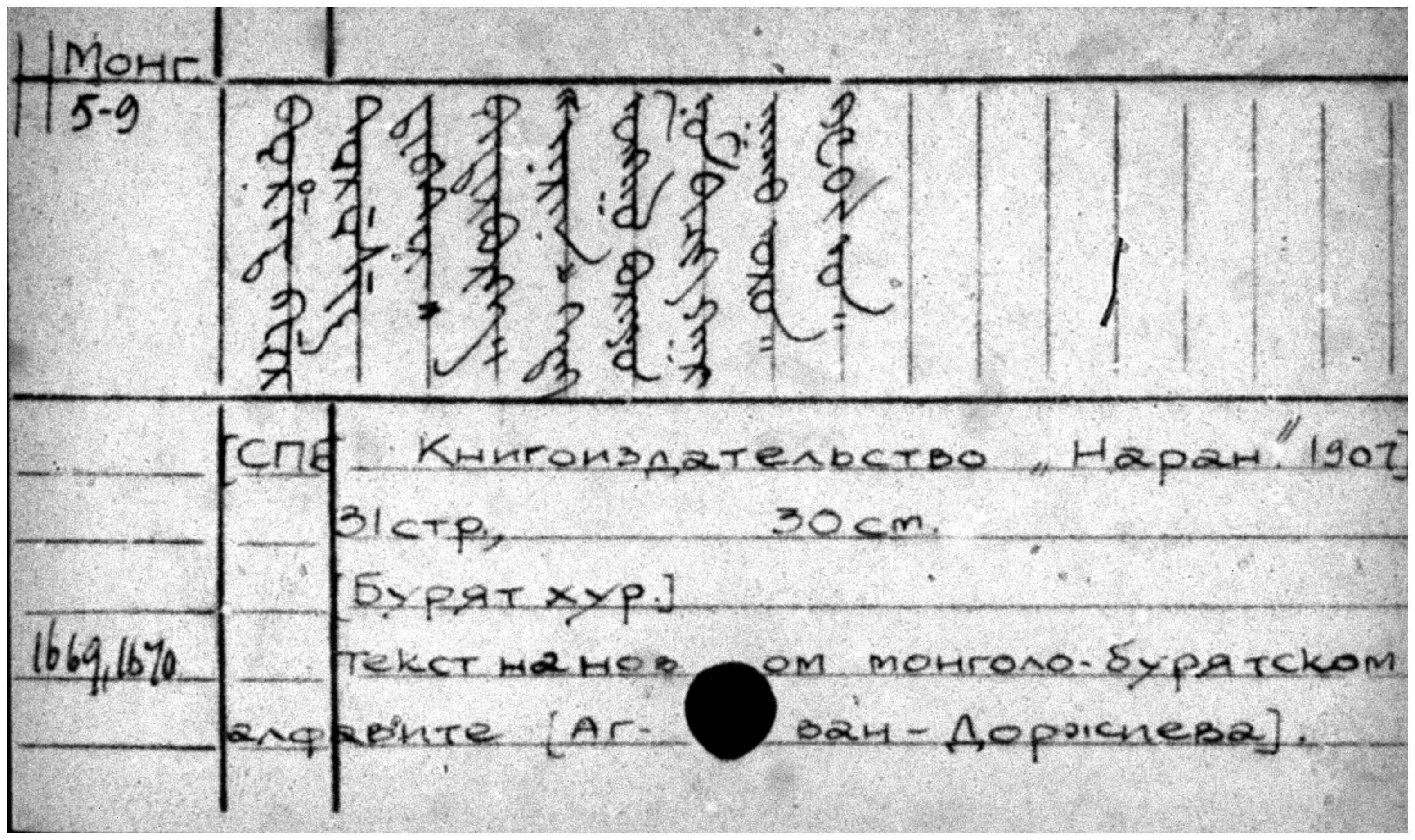 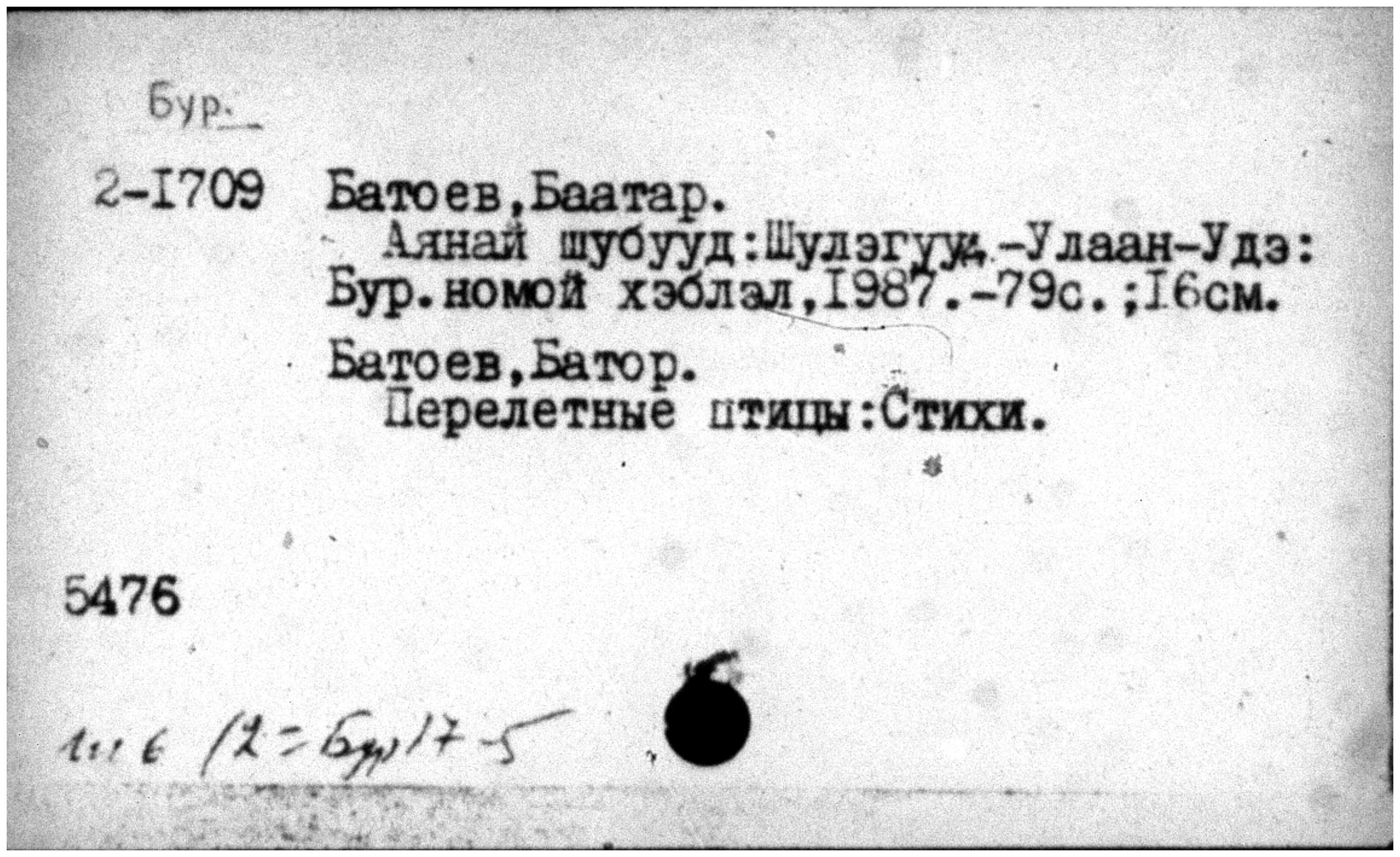 After the creation of the Buriat SSR in the early Soviet years, there was a boom in the publication of Buriat-language literature. Poetry, songs, music, and other forms of folk culture had existed since the mid-18th century, and this traditional folk culture was of major influence on the literature and cultural expressions that were developed after the 1917 Revolution. The responsibilities of Book Chamber (knizhnaia palata) for the Buriat SSR were first assumed in 1925 by the republic’s Central Library. In the late 1930s, the Scientific Library of the Buriat-Mongol scientific-research institute for language, literature and history (GIIaLI) first started compiling bibliographies of the republic’s publications. The official Book Chamber of the Republic Buriatiia was founded in 1958 under the Gorkii Republican Library. It took on the responsibility for collecting and preserving rare materials, keeping records of the republic’s publications, and creating bibliographies of local publications.

In 1958, the Book Chamber began publishing annually a letopis’ pechati, a bibliographic overview of the books and collections, dissertations, periodicals, and other materials published in the republic in a given year. The letopisi have indexes by author name, title, and geographic area. Electronic versions of the letopisi pechati since 1994 are available on the National Library’s website. Through WorldCat, users can find physical (OCLC accession number 12919826 or 62192067) and electronic issues (OCLC accession number 610101017 or 746297075) of the letopis’ pechati.

The electronic library has the following types of materials: books, newspapers, magazines, articles, thematic collections, abstracts, photos, music, audio and video. Users may search by material type and can conduct free searches, simple searches, advanced searches and professional searches. The interface for the advanced search is shown below. Through this interface, users can enter information about the author, title, keywords, date range, and type of document. They can also choose whether they want documents without electronic versions to appear in the results or not. 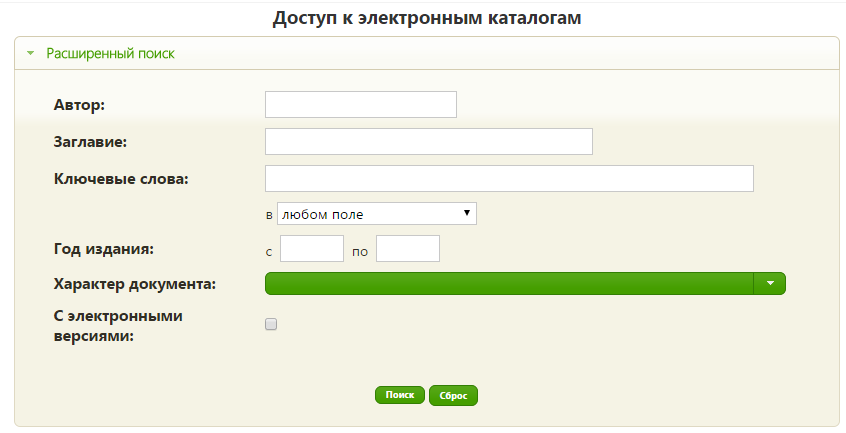 Search results will return bibliographic information, information about the number and availability of copies, and an electronic version of the text. Note that for some documents, full-text downloads are available for all users, while other documents require that the user is on the local library network (in Buriatiia) in order to access the full text. Please note that due to maintenance issues this website may time out – but this can be corrected by refreshing the page.

The Academy of Sciences in Buriatiia

The main archive in Buriatiia is the State Archive of the Buriat Republic. On the archive’s website, in addition to information about the archive’s services, users can find:

Buriatiia is home to Buriats, Russians, Tatars and other ethnic groups. The official languages in the republic are Buriat and Russian. The Buriat language is a Mongolic language, and it is also referred to as Buriat-Mongolian, Buryat and Northern Mongolian. Until the early twentieth century, the classic Mongol and old Buriat alphabets were used for the Buriat language. In 1910, the first attempts were made to introduce the Latin script to the Buriat language, and this Latin Buriat alphabet was finalized under Soviet rule in 1931. In 1939, the Latin alphabet for Buriat was changed into a Cyrillic alphabet. In addition to the letters of the Russian alphabet, the Buriat Cyrillic alphabet has three more characters: Үү, Өө, and Һһ. Users interested in using vernacular languages can download a Cyrillic extended keyboard that can be used for Buriat and many of the other national languages of the Russian Federation.