What is presented on this page are standard bibliographical sources that comprise Bulgarian national bibliography in both the generic sense of the phrase and the more specific. That means that the sources listed here attempt to be comprehensive for the subjects and time periods that they cover and/or are part of the official series Natsionalna bibliografiia na NR Bulgariia. Most of the titles below cover monographic items, as periodical resources and bibliography of bibliographies for Bulgaria are presented elsewhere. There is also a separate page for Bulgarian Monographic Bibliography which includes bibliographies of dissertations, of specific publishers and other works that do not constitute national bibliography.

Modern Bulgarian publishing and bibliography had a rather late start compared to some of the other Slavic nations. (This page does not cover Old Bulgarian or OCS manuscripts and documents). Consider that by 1878 only about 1,650 Bulgarian books had been published. Since 1878 thousands more titles have been published and the Bulgarians then made a few attempts at comprehensive bibliographic coverage before the 1897 Bulgarski knigopis was established. 1897 was the year that a law was passed on legal deposit of printed items. After World War II a Soviet style national bibliography took hold with separate series for different types of materials. All of these series are discussed either below or in one of the other pages devoted to Bulgarian resources. 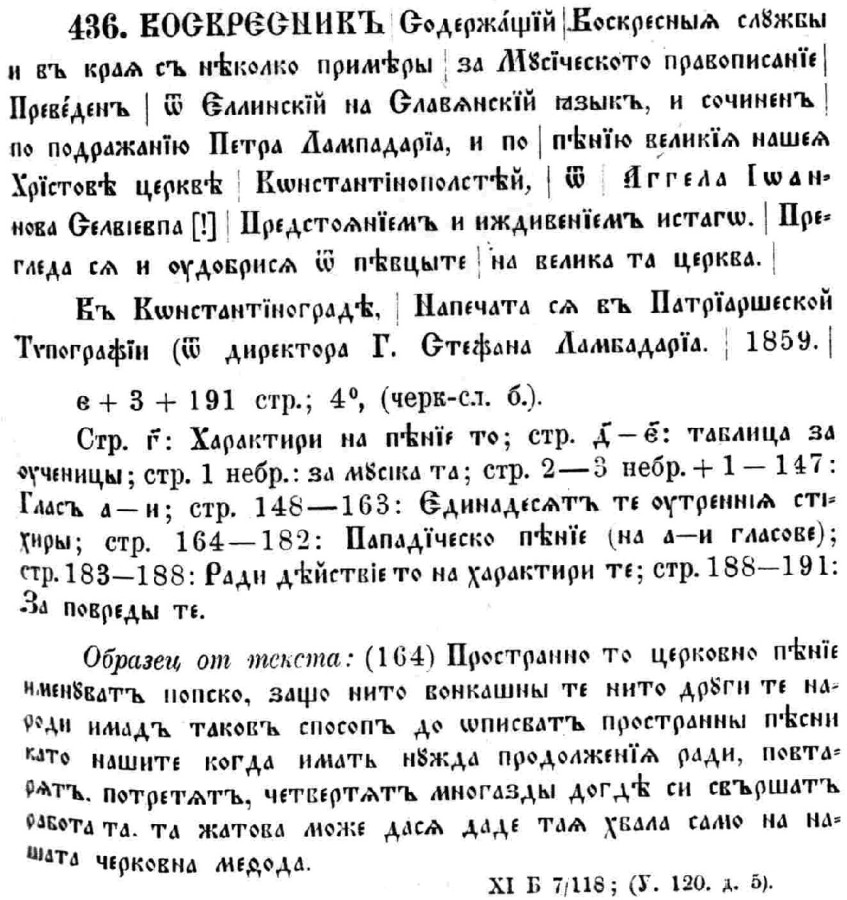 Although most of the over 1600 items covered in this bibliography are presented in other retrospective bibliographies of pre-1878 Bulgarian books (some are discussed below), this work is included here because of the kind of information given in the entries. Not only is there bibliographic data, but often there is also contents with page number and sometimes even excerpts from the text. The entries are arranged chronologically with indexes for authors and anonymous works. In fact, the chronological arrangement is one of the reasons the compiler created this bibliography. The other important bibliographies that handle material from this time period are arranged by main entry. With the chronological arrangement one can more easily trace the development of Bulgarian publishing and scholarly activity. There is also a union listing component showing which libraries hold which title. The abbreviations are explained in the preface. Note that the bibliography is printed in the older Bulgarian alphabet. An update to this bibliography by Charles Jelavich appeared in the Library of Congress’s Quarterly journal of current acquisitions v.14, 1957, pp.77-94. See the entry below for an item published in 1859. 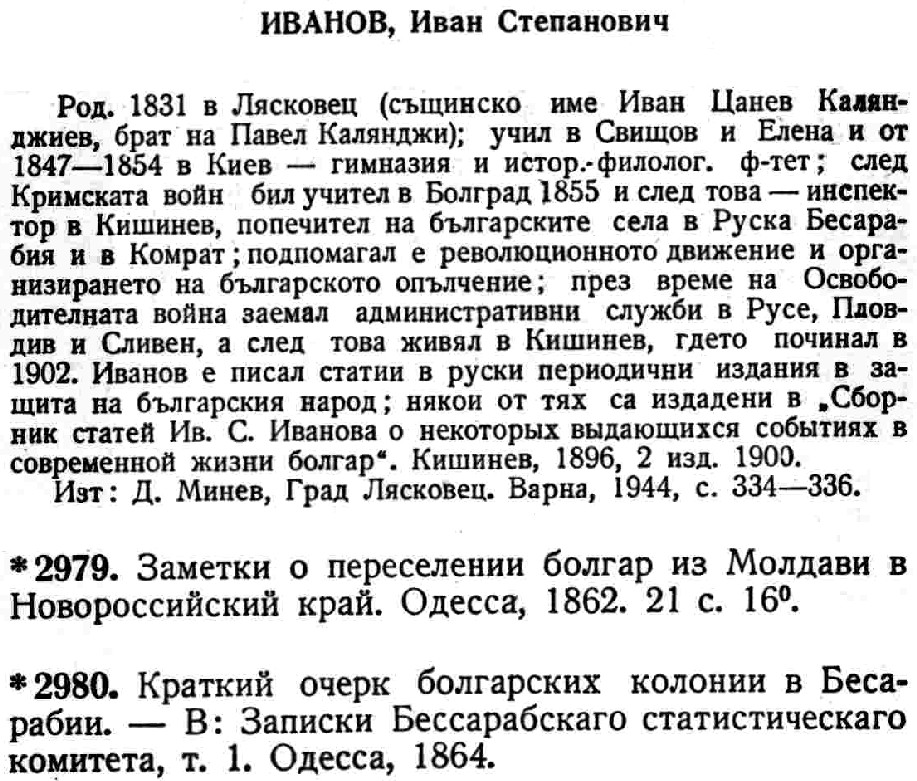 This two volume set represents an enormous compilation of over 20,000 articles and books published in Bulgaria from 1806-1878. It also has a special section devoted to the bibliographic description of periodicals which contains more than the typical information given in periodical bibliographies. For instance, they list the character of the title, the major figures that worked on the title, a cited statement of the title’s program or intent, and a description of the contents. Citations for books and articles merely give the bibliographic citations, but the section on books also provides brief biographies of the authors before the works are listed. Books and periodicals appear in the first volume and articles are in the second volume. Books and periodicals are arranged alphabetically by author and date of first publication respectively. Articles are arranged by subject. There are many indexes in both volumes such as ones for subjects, names, publishers, printers, places. A chronological list of publications gives a further type of access to the contents of this bibliography. Other features include lists of anonymous works, maps, works by foreign writers that were published in Bulgarian, and a section on subscription data. The second volume also has a chronological letopis of periodical titles. See the image on the right for the beginning of the list of works by Ivan Stepanovich Ivanov. 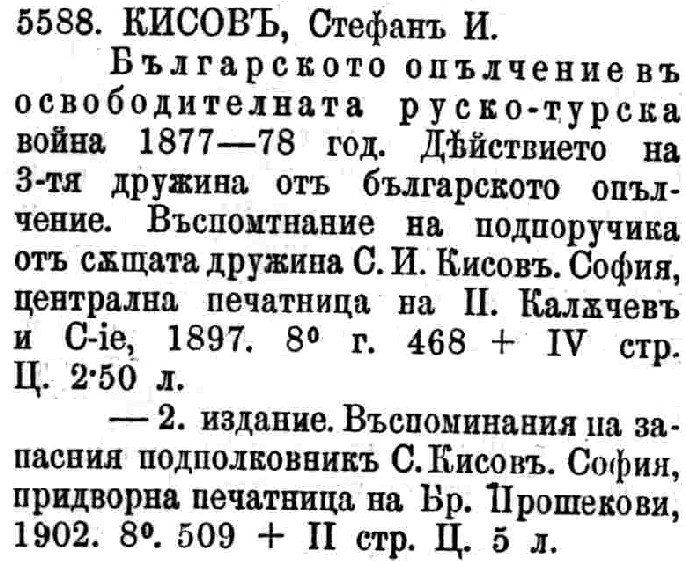 Covering the dates 1806-1905, this retrospective bibliography contains over 15,000 entries for both Bulgarian monographs and periodicals. It was compiled by the noted Bulgarian bibliographer Aleksandur Teodorov-Balan. The link leads to a brief biography of Balan. Citations are arranged alphabetically by main entry, i.e. by surname of the author or by title if there is no author. The index is arranged by subject with alphabetically ordered entries. It also includes a list of series and a section for additions. Other additions and corrections were compiled and published separately by Nikola Nachov, another famous Bulgarian bibliographer. These supplements have been gathered and published together under the title Bulgarski knigopis: supplement, but unfortunately, the University of Illinois does not hold this volume. However, we do hold the supplements as they were originally published in journals. Note the citations and call numbers above. See the entry above left for a work by Stefan Kisov.

U of I Library Call Number: Main Stacks

Since 1897 the Bulgarians have produced a national bibliography covering books, periodicals, maps, and music, but as is typical for such a long-running periodical, the format and frequency have changed a number of times over the years. Early volumes arranged citations into 2 groups, books and periodicals, and within these two groups the works were listed by author for the books and by title for the periodicals. Indexing for each issue began in 1900. Later volumes had separate sections for music, maps, graphic works, etc. with the arrangement by subject, rather than alphabetically by author or title. Later also there are author indexes in each issue and an annual index which provides access to the material in many ways such as by author, title, translation into Bulgarian, place, collective author, subject, series, etc. The index volume is also an annual compilation of all the entries in the monthly issues, thus the single volume is much easier to use than leafing through the monthly issues. Dissertations began to be covered in the main books series in the mid-1950’s.

In 1974 this title split into two series: series 1 for books, scores, maps, and graphic materials and series 2 for dissertations, publications for the blind, and official publications. Both of these series are arranged by type of publication and then by subject with indexes in each issue and cumulative annual indexes. Now the Bulgarian national bibliography appears in eight subseries, some of which are discussed in other sections:
1) Books, music, graphic publications and maps; 2) Dissertations and official publications; 3) Discography; [UIUC lacks this section] 4) Periodical publications; 5) Index of articles in journals and collections; 6) Index of articles in newspapers; 7) Bulgarica; 8) Bibliography of bibliographies. See the image below which shows an entry for a dissertation that appeared in series 2, 1997:4, under the heading of political science.

With over 55,000 items listed, this bibliography provides in depth coverage of the monographic publishing output of Bulgaria from 1878-1944. Many individuals from the National Library and the Bulgarian Bibliographic Institute worked on the compilation. The arrangement of the citations is alphabetical by author or by title if there is no author. The first six volumes comprise the body of the bibliography, but additions and corrections appear in volume 7. Volume 6 contains a list of foreign language publications in Bulgaria. Check also volume 7 for additions to the foreign language publications. Recently, a two-volume name index was issued as volumes 8:1 and 8:2. See the image below for 2 items by authors whose surname was Mikhov. 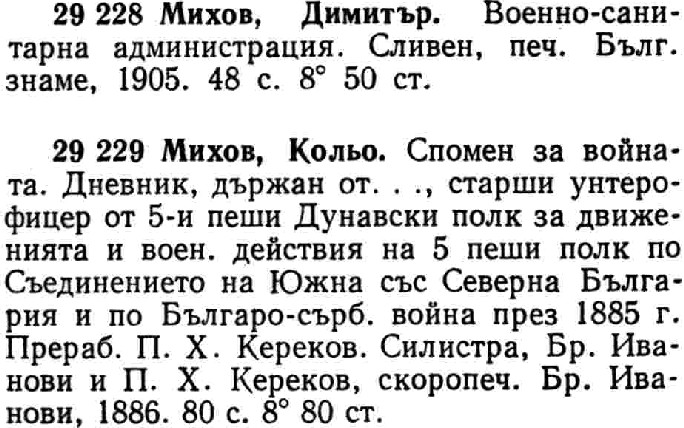 This monthly publication which began in 1993 covers forthcoming publications and new periodical titles issued in Bulgaria as well as new publishers in Bulgaria. The citations are arranged by publisher and show author, title, genre, nationality of the work, and ISBN/ISSN’s. While somewhat difficult to use, it nevertheless offers addresses, phone/fax numbers, and web site addresses for the publishers. Indexes of personal names and titles are included. The second title listed above is the precursor to Novini and lists both new and forthcoming items. It was published for approximately 30 years prior to the advent of Novini. It is arranged by subject and provides annotations on the content of the proposed volumes. See the image below for two items produced by the publishing house Pegas which appeared in Novini, 1993:4.

Although several monographic bibliographies of Bulgarica appeared under the same title, the serial publication that is part of the Bulgarian national bibliography actually began its coverage with the 1964 issue which was published in 1966. Thus, coverage of Bulgarica prepared by scholars at the Bulgarian National Library extends from 1878 to the present day. Other volumes on Bulgarica prepared by the great bibliographer Nikola Mikhov cover the pre-Liberation (pre 1878) years and will be covered in other sections of this course since they are subject specific. This title presents citations for foreign works about Bulgaria. The citations are arranged into 3 sections: foreign writers on Bulgaria and the Bulgarian people; works of Bulgarian authors published in foreign languages; works in the Bulgarian language published outside of Bulgaria. Within each of these sections the citations are arranged by subject with indexes for names, collective authors, titles, dissertations, series, language of publication, country of publication, and for belles-lettres by language and country. See the entry below which appeared in the 1995 issue.

Often online library catalogs are a very handy way to find out information about current publications in a particular country. There are various online catalogs at the St. Cyrill and St. Methodius National Library website. Four union catalogs are available: a catalog of Bulgarian and foreign books; a union catalog of foreign periodicals from 1984 to the present which are held in 182 Bulgarian libraries; a union catalog of foreign books from 1995 to the present; articles from Bulgarian journals, newspapers and collections. There is hardly any information on the website to explain further the depth of coverage of these catalogs. All of the catalogs require the use of Cyrillic fonts for searching unless you are searching for publications that originated in non-Cyrillic alphabet languages. Also the searching capabilities are quite limited, keyword only. The image below shows results for a search in the article database for Todor Borov. 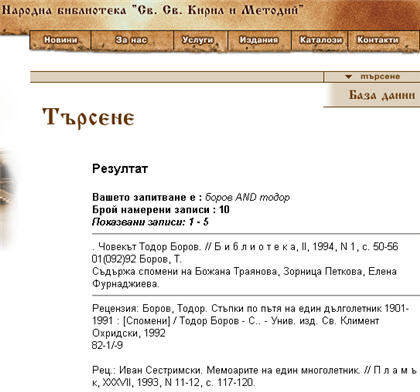 Other institutions have online catalogs available via the Internet such as the University of Sofiia and the Varna Public Library, but in general Bulgarian libraries do not yet have a vigorous presence on the Internet.