The Bashkir Autonomous Soviet Republic was established in 1919, and became the Republic of Bashkortostan in 1990. Its capital is Ufa. Bashkortostan is located in the Ural Mountains and is home to ethnic Russians, Bashkirs, Tatars and a number of other nationalities. The Bashkir language is a Turkic language.

This guide also highlights other resources related to Bashkir history, culture and language. Researchers may also want to consult the following online database for additional coverage: Elektronnyi katalog knig na iazykakh narodov RF i stran SNG on the homepage of the the Russian National Library. This guide also highlights online resources – in particular the Bashkir National Library Electronic library which has a select collection of digitized full-text documents.

Sources: The Great Soviet Encyclopedia (Volume 3, page 50); the Official website of the Republic of Bashkortostan; Ethnologue.

The National Library of the Republic of Bashkortostan, named after Akhmet-Zaki Validi, was established in 1836. The library currently has over 3.3 million items. The library’s electronic catalog (Elektronnyi katalog) provides a way for users to obtain bibliographic information about the holdings at the national library. There is no period of coverage given for this catalog, but its contents are assumed to reflect the holdings at the National Library. Users may search by material type, author, title, theme, year of publication, and location of publisher. There is also a virtual keyboard to type in Bashkir. The advanced search interface is shown in the image below. 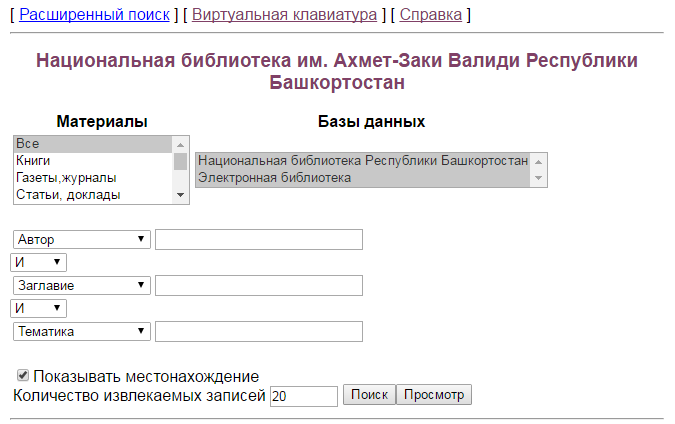 Results give the following information: author, title, location of publication, date of publication, the number of items available, BBK, and location. Sample results are shown in the image below. 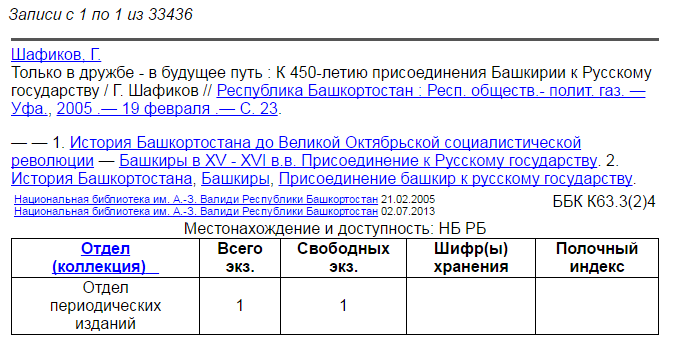 The Russian National Library’s Department of Literature in National Languages [also known as the Department of National Literatures] of the Russian Federation, Commonwealth of Independent States, and the Baltic countries has reproduced holdings catalogs in microfiche format. The national languages imprints catalogs in microfiche format diffuse most of the difficulties associated with transliteration in the vernacular languages, spelling, forms of entry, and uncertainties with the entirety of the collection. Researchers can access the complete holdings for a specific language at the Russian National Library through the microfiche set, conveniently exporting selected titles via PDF scans. The following scans reflect some of the Bashkir-language holdings available in microfiche format. 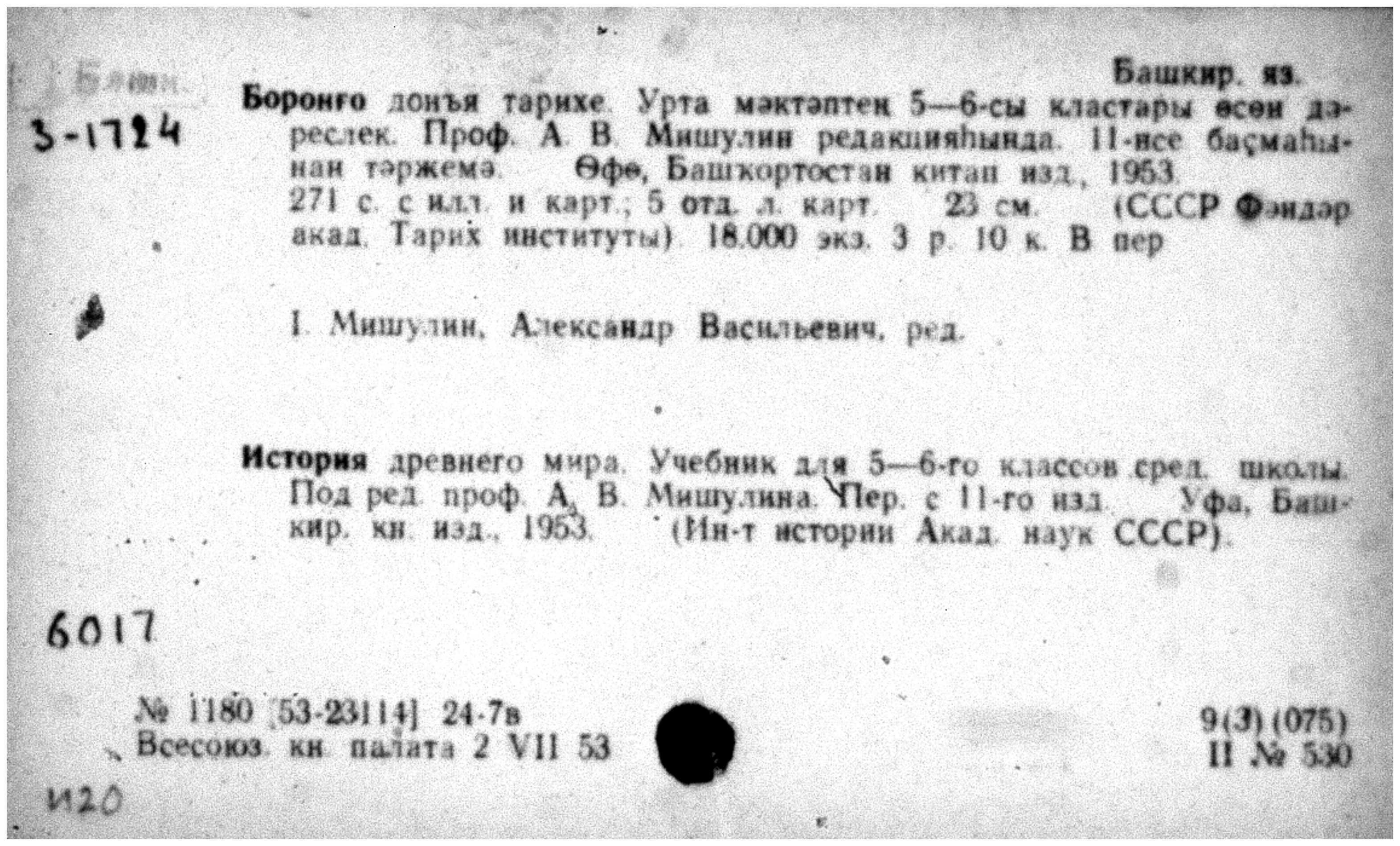 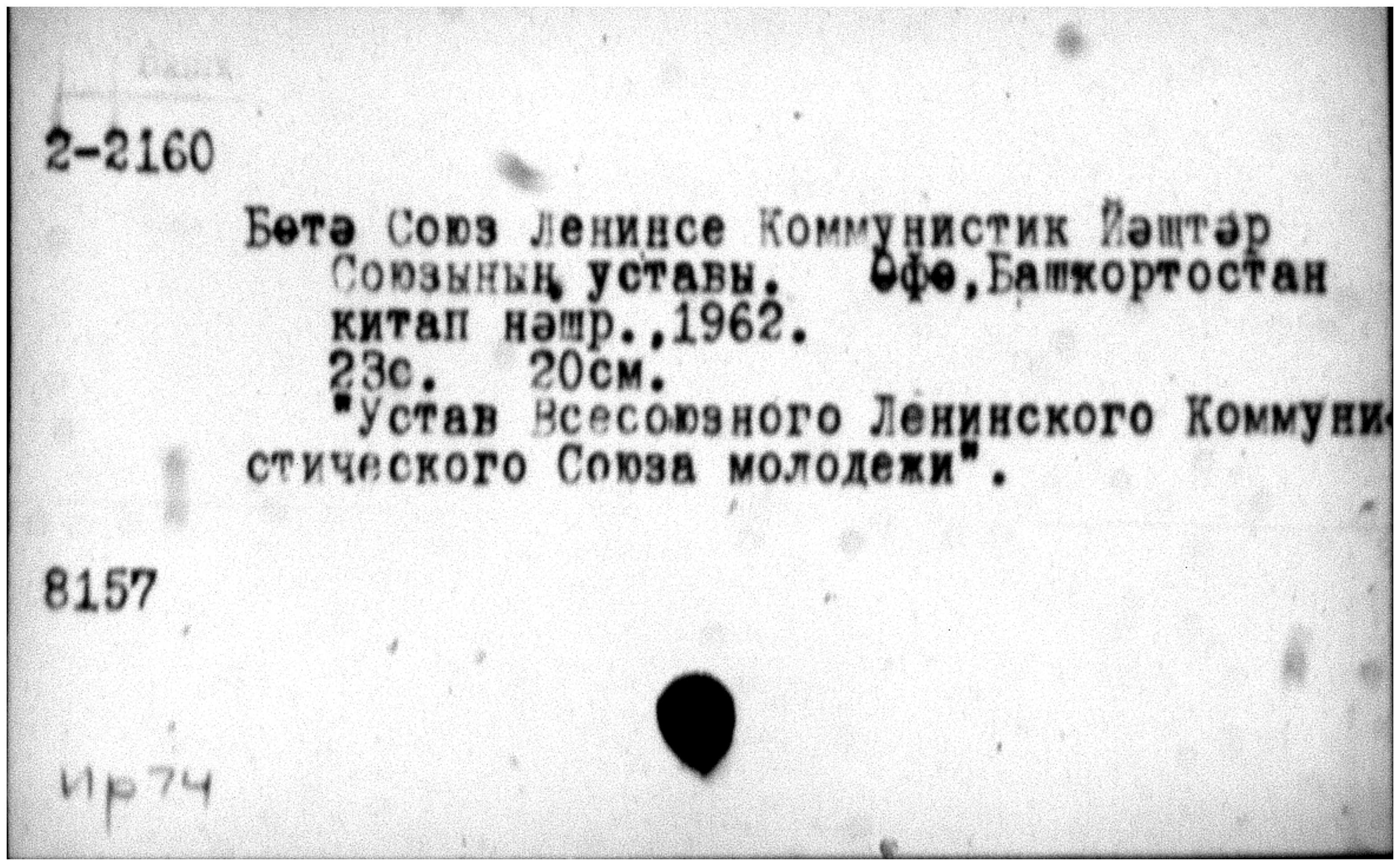 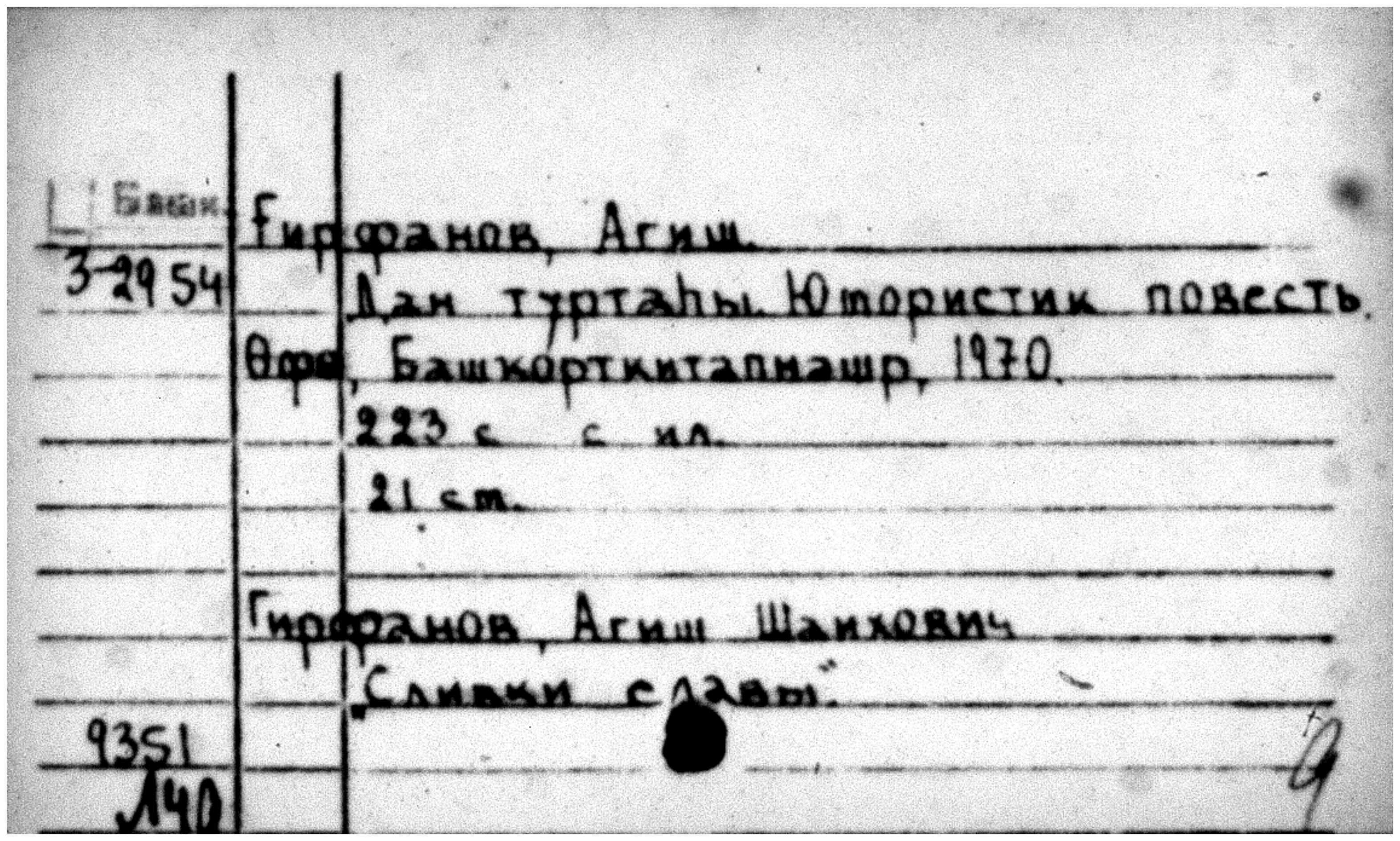 In the first decades of the Soviet period, the number of Bashkir-language publications strongly increased, primarily in the form of newspapers, journals, and books on a wide range of subjects. In order to create bibliographies to document and organize the growing body of literature published in the republic, a Book Chamber (knizhnaia palata) was established in the Bashkir ASSR in 1929. Rare books from the pre-revolutionary and Soviet periods were added to the collection, and as of 1960, the collection of local materials contained more than 200,000 items in Bashkir, Tatar and Russian. Publications from other republics such as Azerbaijan, Turkmenistan, Kazakhstan, Uzbekistan, and Tatarstan were also added to the collection of the Book Chamber.

Since 1935, the Book Chamber has published annually a letopis’ pechati with a bibliographic overview of all the publications – books, brochures, and articles – of the republic for a particular year. Since 1964, a separate section has been included in the letopis’ on Bashkir writers, Bashkir folklore, and literature on Bashkortostan published in other republics of the USSR. The knizhnaia letopis’  published in the Soviet period consists of two sections: the first contains works in Bashkir and Tatar, and the second materials in Russian. The materials are organized alphabetically by author and by publication title. In addition to the letopis’ pechati and the khizhnaia letopis’, the Book Chamber has been publishing the letopis’ pechati Respubliki Bashkortostan, as well as the series Knigi Bashkortostana in Bashkir, Tatar, and Russian, and numerous bibliographies related to Bashkir history. As of 2012, the Book Chamber’s collection included more than two million books, newspapers, and journals published in Bashkortostan. Annually, the Book Chamber publishes about 30,000 items in six languages: Bashkir, Russian, Marii, Tatar, Udmurt, and Chuvash.

Newspapers and magazines of Bashkortostan

As of 1968, 241 books and pamphlets (1,658,000 copies printed) and 112 newspaper editions (966,000 copies printed) in Russian, Bashkir, Tatar, Mari, Chuvash and Udmurt were published. The following is a list of newspapers and their start dates of publication: Sovet Bashqortostani (1918), Sovetskaia Bashkiriia (1906; previous name Ufimskii rabochii), Kizil tan (1918), Leninse (1923) and Bashqortostan pionere (1930). The following is a list of magazines published and their start dates of publication: Agidel’ (1930), Baqortostan kizi (1968), Khenek (1925), Bashqortostan ukitiusikhi (1924), Pioner (1930) and Bloknot agitatora. Users can consult Gazety SSSR 1917-1960: Bibliograficheskii spravochnik 5 for a more comprehensive list of newspapers published in Bashkortostan during these years.

The electronic library is a searchable collection of online documents available to users in full text format. Users can search the collection by keyword. Results give information about the title, the heading under which it appears, and the excerpt in which the key word appears. Some documents are available to all users online as full-text documents which can be read on the website. Other documents are only available to users with authorization. When you click to read these particular documents you will be taken to a “login page.” U of I patrons can access these documents by registering on the site (free of charge). It can take up to a week to receive a confirmation email with password and login information. After obtaining this information, users should have access to all the materials on the website. Please note that due to maintenance issues, this website may time out, but his can be corrected by refreshing the page.

Users can browse the collections by the following topics: books about the Bashkirs, Bashkir-language books, bibliographies, literature for children and youth, multimedia, new arrivals, periodicals, manuscripts and rare books, and Russian and foreign literature.

The bibliographies section (Bibliograficheskie posobiia) may be especially useful for researchers and includes (but is not limited to) the following bibliographies:

The website Bashkirskaia Entsiklopediia is a useful online resource that allows users to search information and sources related to history, culture, and language in Bashkortostan. The search interface allows users to search by alphabetic order, theme, names of important individuals, ethnic groups of Bashkortostan, and other categories. In total, the collection of articles and other sources contains more than 18,000 entries, including bibliographical entries, illustrations, maps, and audiovisual materials. Each entry of the encyclopedia includes a list of references to relevant bibliographic guides and other related publications. In the subsection “knigoizdatel’skoe delo“, users can find information about the main publishing houses in Bashkortostan: Bashkirskaia entsiklopediia, Bashkortostan, Belaia Reka, and Kitap. The page provides some of the major titles published in the republic, as well as statistics about the number of books published in specific years in the pre-revolutionary, Soviet, and post-Soviet periods.

The Bashkir language is also referred to as Bashkir, Bashqort and Basquort and is a Turkic language. The Bashkir language has used several scripts: it moved from old Turkic to Turki (a variation of the Arabic script) in the 10th century; in 1923, it changed to a different Arabic script designed specifically for the Bashkir language; between 1923 and 1930 it was replaced by the Latin script, and eventually by an adapted Cyrillic alphabet in 1938. The Bashkir alphabet includes several characters that do not exist in the Russian alphabet: Ғ ғ, Ҙ ҙ, Ҡ ҡ, Ң ң, Ө ө, Ҫ ҫ, Ү ү, Һ һ, and Ә ә. Users interested in working with vernacular languages, can download a Cyrillic extended keyboard that can be used for Bashkir and many of the other national languages of the Russian Federation.