The Oirot Autonomous Oblast’, was established in 1922. In 1948, it was renamed the Gorno-Altai Autonomous Oblast’. In 1990, it received the status of Autonomous Soviet Socialist Republic, and in 1992 it became the Altai Republic within the Russian Federation. The Republic is located at the junction of Kazakhstan, Mongolia, China and the Siberian taiga. Its capital is Gorno-Altaisk. Altai is a Turkic language, and until 1948, it was named Oirot.

This is a beginning guide to bibliographic tools for researchers of Altai. Though not a comprehensive overview, this guide outlines three primary ways researchers can access bibliographic information about Altai publications:

The Russian National Library’s Department of Literature in National Languages [also known as the Department of National Literatures] of the Russian Federation, Commonwealth of Independent States, and the Baltic countries has reproduced holdings catalogs in microfiche format. The national languages imprints catalogs in microfiche format diffuse most of the difficulties associated with transliteration in the vernacular languages, spelling, forms of entry, and uncertainties with the entirety of the collection.  Researchers can access the entire holdings for a specific language at the Russian National Library through the microfiche set; conveniently exporting selected titles via PDF scans. The following scans reflect some of the Altai language holdings available in microfiche format. As can be seen, there are records in both Cyrillic and Latin script. 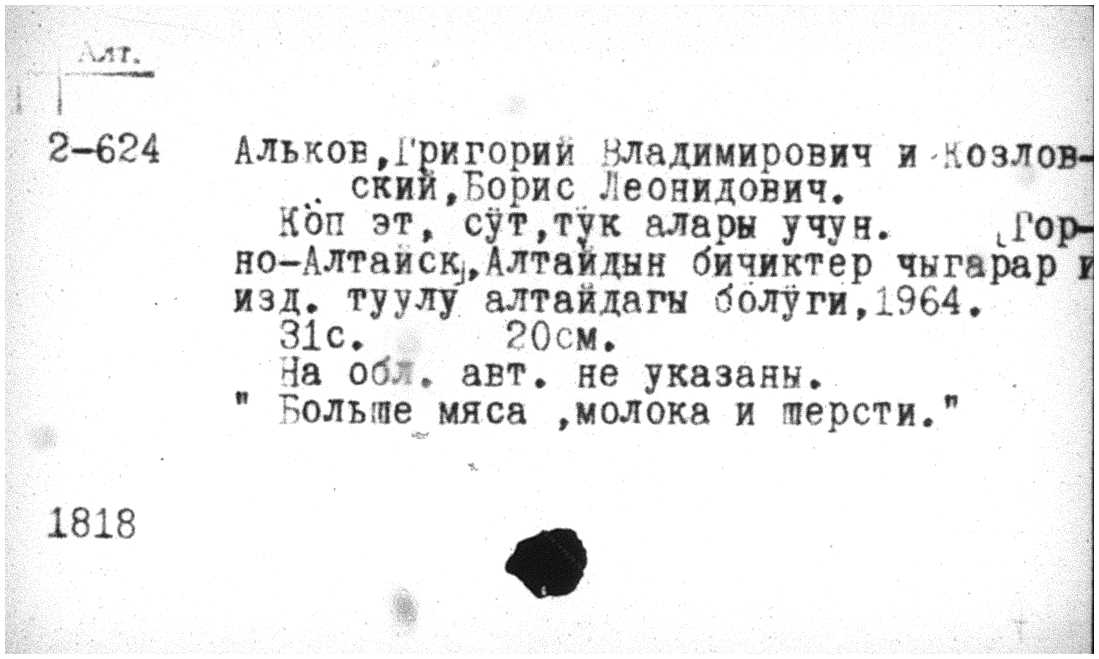 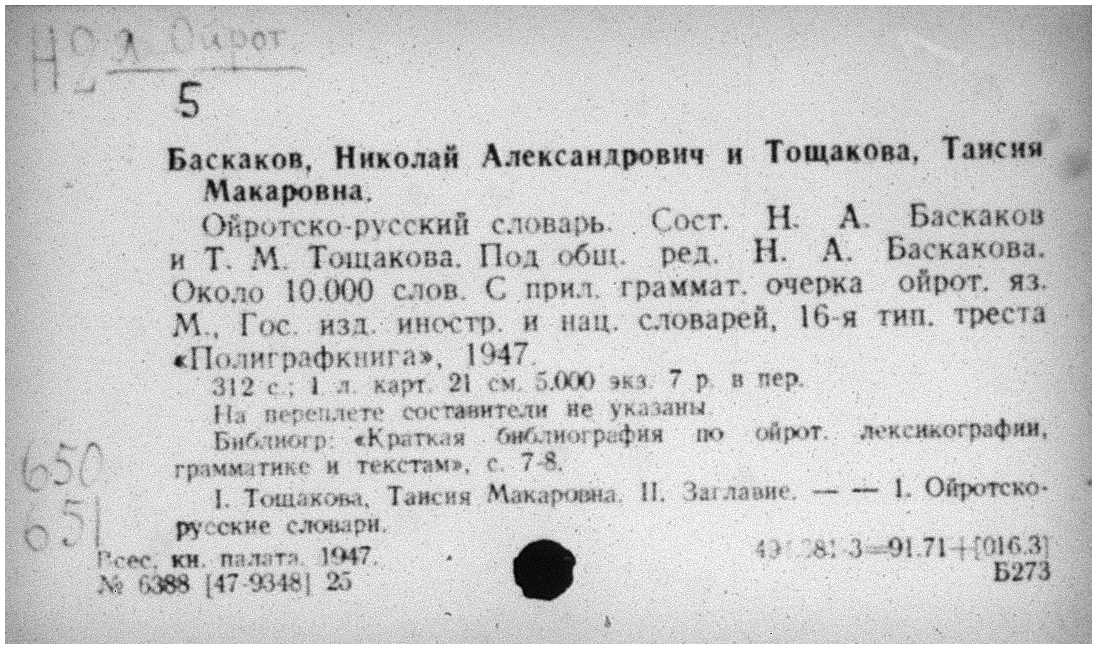 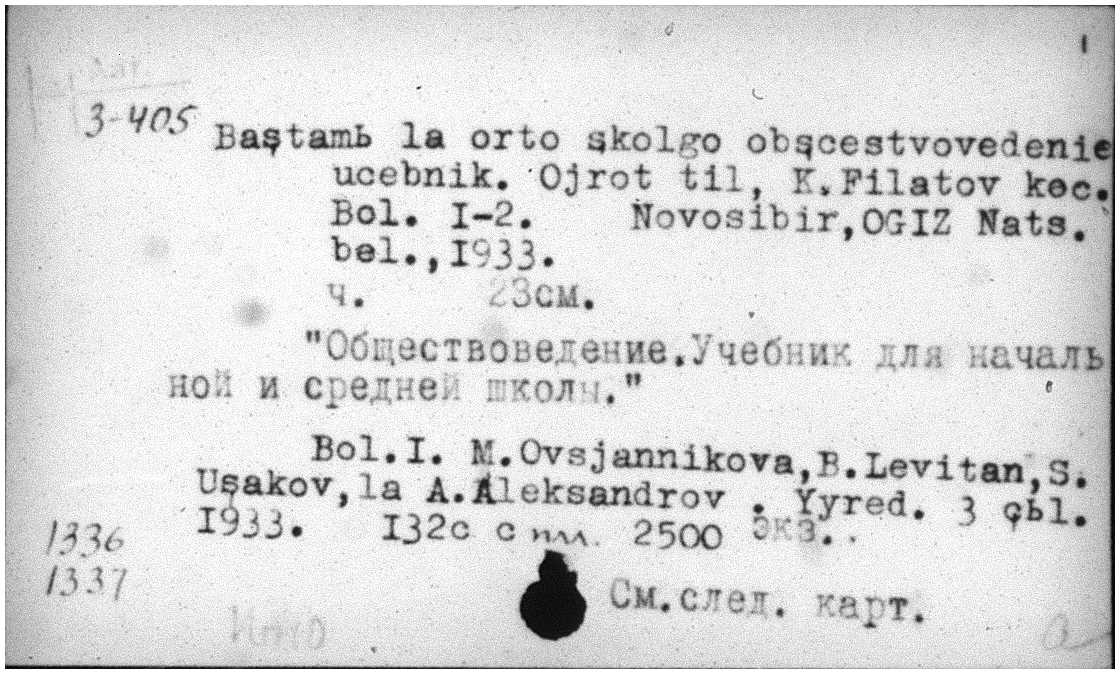 Letopis’ pechati and publishing in Altai

Letopis’ pechati is a bibliography that lists all publications in the Republic of Altai for each year (since 2002) in the following categories: books, brochures and periodicals. The National Library of the Republic of Altai has the letopisi pechati for 2002-2004, 2006-2007, 2009-2011, and 2013-2016 available electronically on their website. These documents can be downloaded as PDF or Word files. Note that not all the letopis’ pechati files are labeled according to the year, and users may need to open document in order to view the year of coverage. To read these documents, users may need to install the font, “Altai.” Through WorldCat, users can also find editions of the letopis’ pechati of Altai in physical (OCLC accession number 154723758) and digital form (OCLC accession number 619278788).

Entry information for items listed in the letopis’ pechati includes: a general classification number given at the beginning of the section, a consecutive entry number, author, title, place of publication, publisher, date, pagination, illustrations, size, serial statement, ISBN, number of copies printed, price, government registration number, e.g. [94-1546] and other necessary bibliographic information for citations. Three sample entries are shown in the image below. Please note that due to maintenance issue this website may time out, but this can be corrected by refreshing the page.

The Altaiskaia kraevaia universal’naia biblioteka im. V.Ia. Shishkova has developed the website “Elektronnye resursy Altaia“. The website seeks to serve as a platform for libraries, museums, theatres, researchers, and other parties, and is meant to increase the interest in the local history of the republic. It provides access to a large number of materials from and about Altai, such as books, bibliographies, and maps. The page “Knigi Altaia v nalichii i pechati” provides knizhnye letopisi for all the books published in the Republic for the years 2001-2018 that users can search by theme. The “kalendary znamenatel’nykh dat” gives access to PDF documents of overviews of important dates and events in Altai for a given year since 1971 (with a few editions missing). Lastly, the website provides information about important individuals in Altai literature, monuments, culture and art, and an overview of publications by researchers of the Shishkov Library.

The main archive in the Altai Republic is the Altaiskii Krai State Archive. The collections of this archive contain more than 2.4 million documents in more than 6800 fonds. The documents cover the period 1744-2012. On the archive’s website, users can find information about its collections, services, projects, and materials that are available online. In the online database, users can search by title words, item number, year of publication, and specific sections of the archive. The archive’s online materials include:

The official state languages in the Altai Republic are Altai and Russian. Altai is a Turkic language, and is also referred to as Oirot, Oyrot, Northern Altai, Southern Altai, Telengit, Telengut, and Teleut. Until 1922, the Altai written language was based on the Cyrillic script, between 1928-1938 on the Latin script, and since 1938 it uses the Cyrillic script again. Aside from the letters of the Russian alphabet, it has nine additional characters: Јј, Ҥҥ, Ӧӧ, Ӱӱ, Ғғ, Ққ, Һһ, Ҹҹ, and Ii. Users interested in working with vernacular languages can download a Cyrillic extended keyboard that can be used for Altai and many of the other languages of the Russian Federation.

The electronic library is a project of the M.V. Chevalkova National Library to gather, and make electronically available, information pertinent to the cultural heritage and history of the Republic of Altai. The collection currently includes newspapers (from the 1920s-1950s), rare books from the late 19th and early 20th centuries, magazines, and books on the history, ethnography, geography and economy of the Altai Region. All documents have full text availability for all users.

The interface only allows for basic searches. In addition to finding information through basic searches, users can also browse by collection. The collections available through the electronic library are as follows:

Each collection has a brief overarching description and each item has bibliographic information listed, which can be downloaded as a PDF file. The results from a sample search are given below.

Note that the preview of the item is brought up by clicking on a listing like one of the above. In order to read the full text, users must download the PDF file from the preview page, which is shown below.

Users can browse periodicals by publication name, year and issue. The full text for an issue of a periodical can be accessed by clicking on the issue number. This brings up a scanned image of the full text (see image below), which cannot be downloaded, but can be read online. Please note that due to maintenance issues, this website may time out – but this can be corrected by refreshing the page.