The Adygeia Autonomous Region was established in 1922 and became a Republic within the Russian Federation in 1991, under the name Republic of Adygeia. Its capital is Maykop.

The following is a beginning guide to bibliographic tools for researchers of Aydgeia. Though not a comprehensive overview, this guide outlines two primary ways researchers can access bibliographic information about Adygeian publications:

Additionally, this guide highlights other resources related to Adygeian culture, history, and language. Researchers may also want to consult the following online database for additional coverage: Elektronnyi katalog knig na iazykakh narodov RF i stran SNG on the homepage of the the Russian National Library. Lastly, this guide highlights the electronic library associated with the National Library of Adygeia through which users can access select digitized, full-text documents.

In 1992, when Adygeia was granted the status of Republic within the Russian Federation, the Republican Universal Scientific Library of Adygeia became the republic’s National Library. Its priority became the further development of local and national bibliographies. To that end, within the library’s department of local and national literature, a section for national bibliography was created which fulfills the role of Book Chamber. This section began to create records of all the materials published in the republic, as well as an archive where it collected many important printed materials. The Book Chamber also began publishing the letopis’ pechati for the Republic Adygeia. Several letopisi had been published since 1968, but after 1992 they were published systematically for every year, and included books, articles in newspapers and journals, and reviews in Adygei for a given year. Today, the collection of the National Library of Adygeia includes more than 540.000 items, ranging from Adygei-language literature in all areas to audiovisual materials and rare publications from the 19th and 20th cc.

There is no information provided online about the coverage of the National Library’s electronic catalog; it is therefore unclear to what extent it reflects the holdings of the National Library of the Republic of Adygeia. Users have the option of a basic or advanced search. The image for the advanced option (shown below)  allows users to search by author, serial, local identifiers, subject rubrics, date of publication, location of publication, author, date of recording, editions, annotations, ISBN and ISSN.

The search results are organized in a table that gives information about the author, title, place and date of publication and the edition. The image below shows results from a sample search.

The Russian National Library’s Department of Literature in National Languages [also known as the Department of National Literatures] of the Russian Federation, Commonwealth of Independent States, and the Baltic countries has reproduced holdings catalogs in microfiche format. The national languages imprints catalogs in microfiche format diffuse most of the difficulties associated with transliteration in the vernacular languages, spelling, forms of entry, and uncertainties with the entirety of the collection. Researchers can access the entire holdings for a specific language at the Russian National Library through the microfiche set; conveniently exporting selected titles via PDF scans. The following scans reflect some of the Adygea language holdings available in microfiche format. As can be seen there are records in both Cyrillic and Latin script. 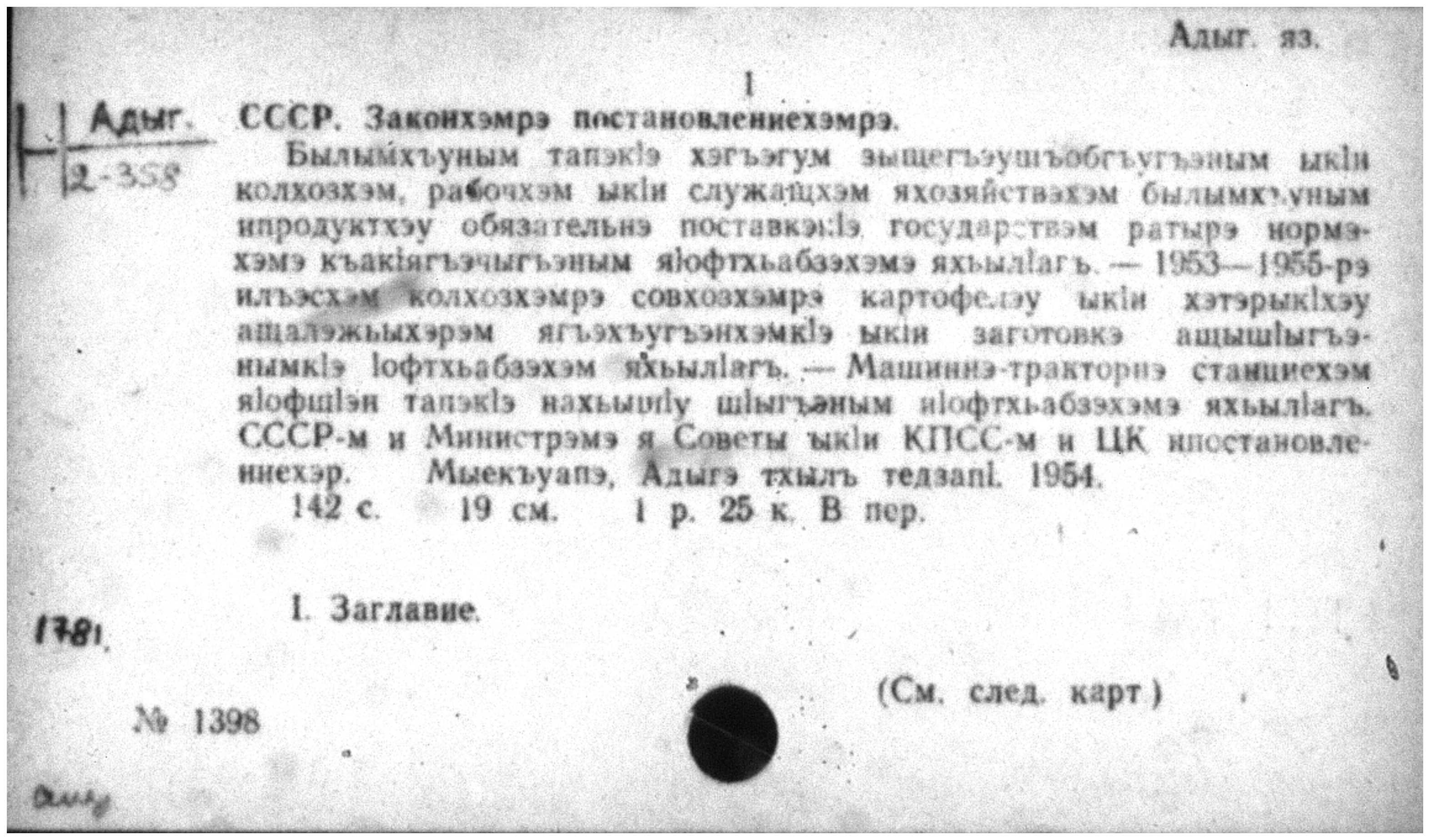 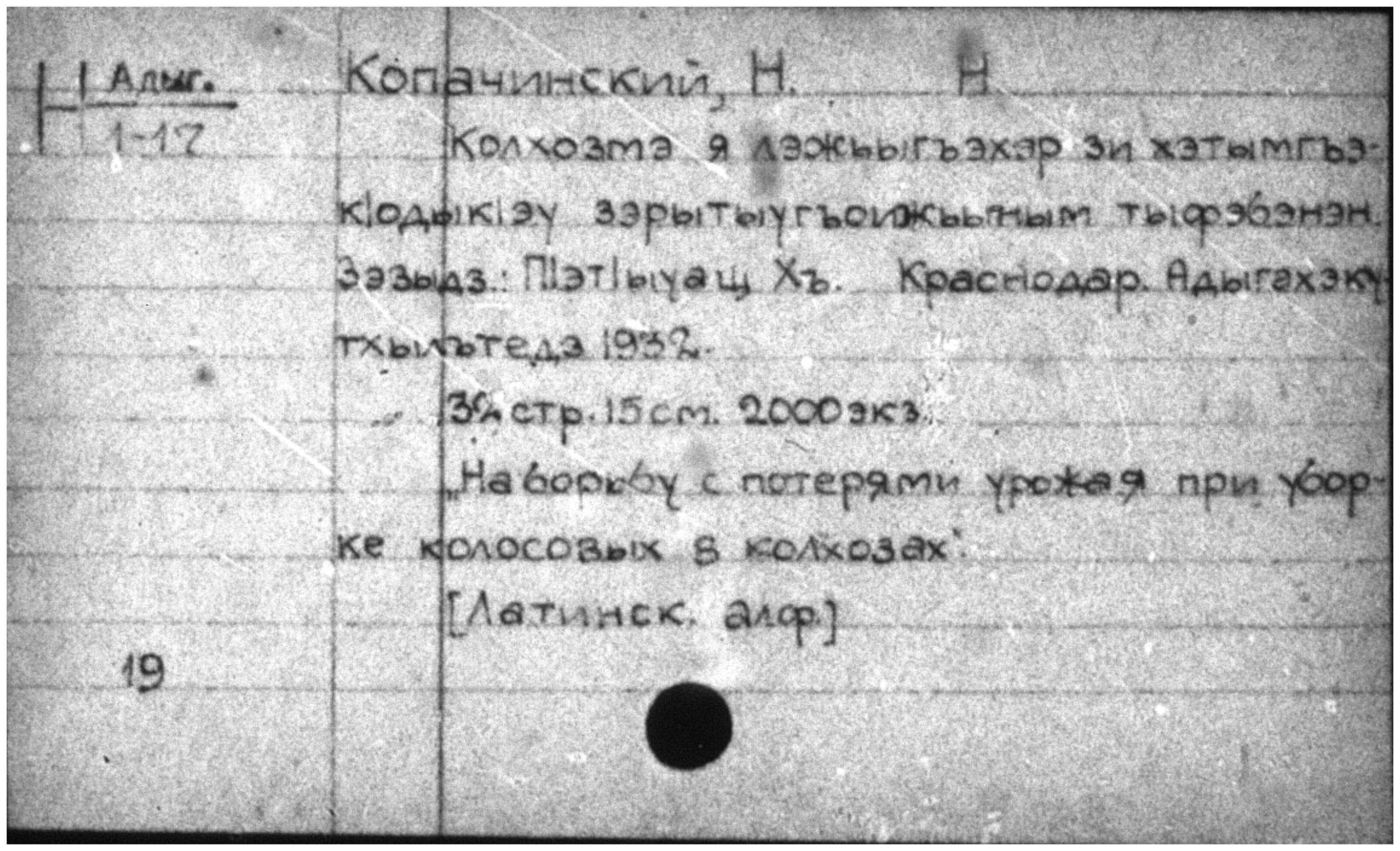 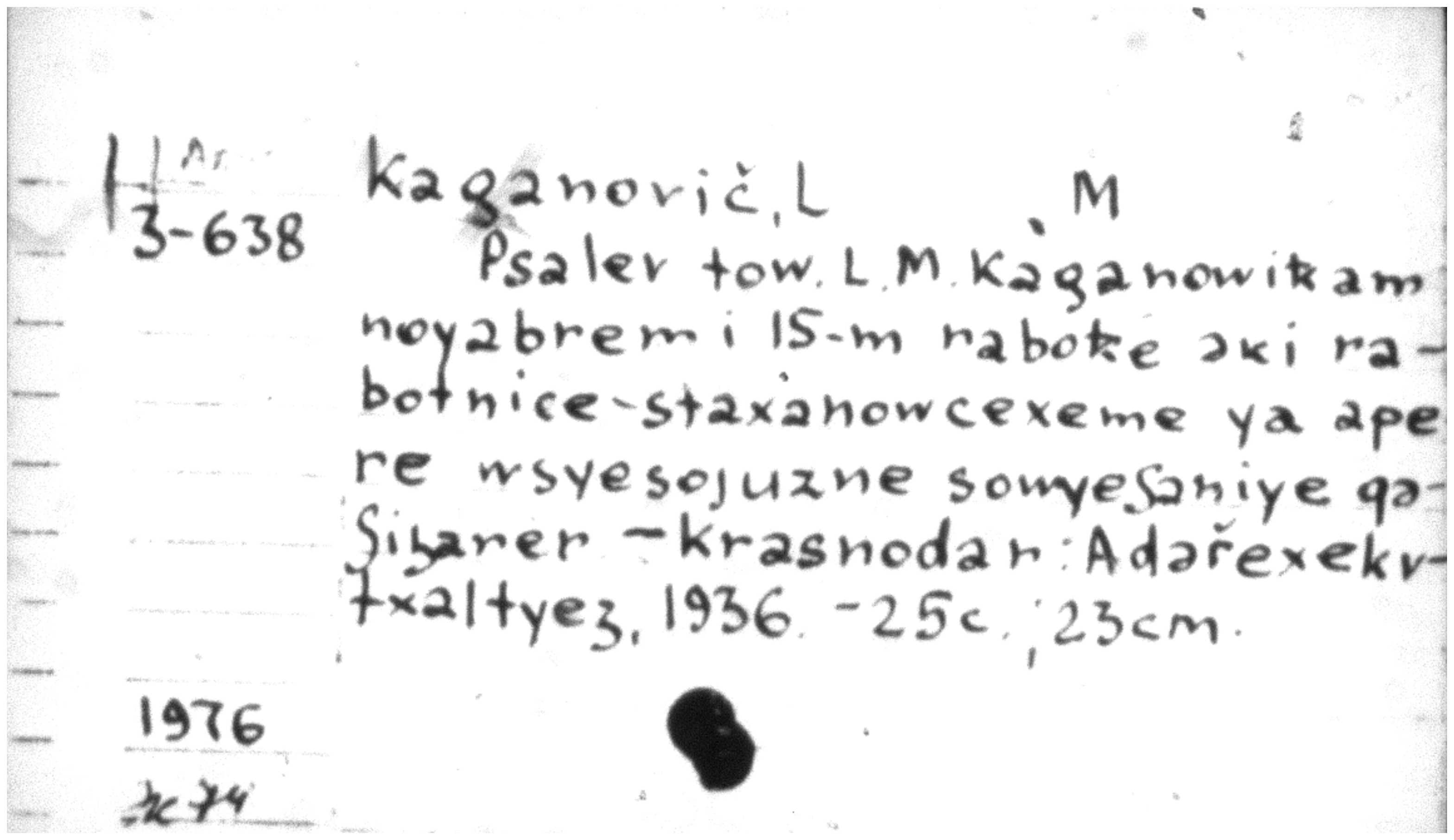 The electronic library gives patrons free access to full-text digitized documents online. Users can search by author, title, location of publisher, date of publication, and key words, or they can browse by alphabetical listings and recent additions.The advanced search interface is shown in the image below. 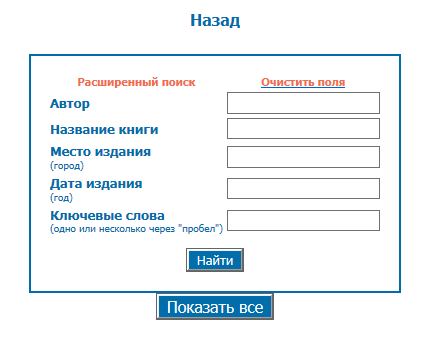 The results give full access to digitized texts that can be read on the website, as well as basic bibliographic information. U of I patrons cannot download these documents as PDF files, but they can read them on the library webpage. Please note that due to maintenance issues, this website may time out, but this can be corrected by refreshing the page.

This online resource, created by the Iu. Kh. Kalmykov Foundation for Cherkess culture “Adygi,” is meant as a platform for improving the ties between Circassians and other ethnic groups, and the preservation, development, and study of Circassian culture. On this website, which contains useful information for beginning and more advanced researchers, users can find articles about Circassian history and culture, the Circassian diaspora, important individuals in Circassian history, and examples of Circassian folk tales and contemporary cultural events and initiatives.

Adygeia is located in the Northwest Caucasus, and it is a multi-national republic that is home to Adygei, Russians, Armenians, Belarusians, Ukrainians, Greeks and other ethnic groups. The Adygei language is a Northwest Caucasian language that is also referred to as Adyghe, Adygey, Circassian, Kiakh, Kjax, Lower Circassian and West Circassian. Between the mid-nineteenth century and 1927, the Arabic script was used for the Adygei written language. Between 1927 and 1938, the Latin script was used, and since 1938, the Cyrillic script. Adygei uses the letters of the Russian alphabet, and has one additional letter: Ӏi. Users interested in vernacular language materials can download a Cyrillic extended keyboard that can be used for Adygei and many of the other languages of the Russian Federation.