E-gov.am: electronic government of the Republic of Armenia

The President of the Republic of Armenia

As the president of the Republic of Armenia, Mr. Serzh Sargsyan maintains a robust on-line presence . Scholars and political scientists can browse through the official decrees, the structure of the office of the president [advisers, administrative staff, envoys, etc], transcripts of press conferences and interview,  and most importantly,  a collection of official documents.  The collection mainly consists of presidential decrees (2008-2012), signed laws (2012), and presidential directives (2012).  All documents listed on this website are in Armenian.

The National Assembly of the Republic of Armenia 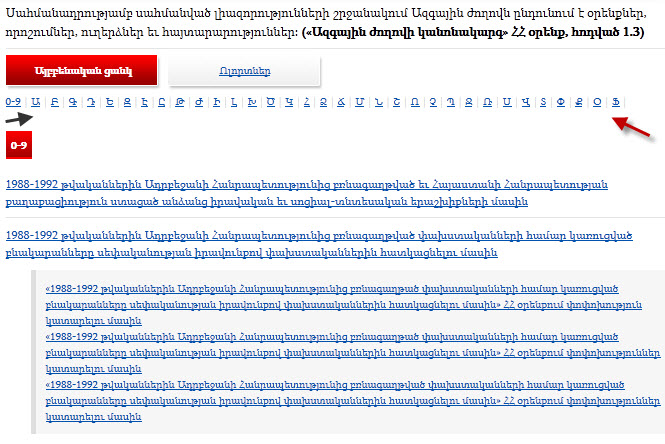 As the main legislative body in the republic, the National Assembly of Armenia’s official website is an invaluable guide to researchers and political scientists.  The right navigation bar consists of nine sections  and includes a directory of links for national, regional, and cultural institutions.  To connect users with the laws, decisions, addresses, and announcements of the Republic of Armenia, the site administrators have set up an alphabetical listing of subject areas [A-Z] and linked each subject or legislative topic to the full-text legislation passed the National Assembly of Armenia.  For example: if researchers are seeking a legislation on accounting in Armenia, then by clicking on “accounting,” the users will be taken directly to the legislation.  Since this website supports content in four languages [Russian, Armenian, French, and English], the interfaces for Armenian and Russian contain additional information not found in the English or the French [see above image].  Researchers are strongly encourage to view the Armenian version before proceeding to the English or French versions.

Ministry of Labor and Social Affairs

According to the ministry, this website contains information on regulations, legislative acts, social programs and departments within the ministry.  Access: http://www.mss.am/home/index.php?home.

Ministry of Education and Science

As the official website for the ministry, this online resource is the destination for official reports, legislation associated the education policies and reforms enacted since independence, and official communiques of the ministry.

The ministry is “… responsible for developing and implementing the Republic of Armenia government’s policy in the spheres of national income formation and the state finance managment.”  This website contains published reports, statistics, legislation, internal and external policies of the Republic of Armenia, and budgetary information.  Researchers can access the documents using Armenian and Engish language interfaces.

The publication of official statistics in Armenia proper began with the establishment of the first statistical agency, “Statistical Department of Soviet Socialist Republic of Armenia,” on January 7, 1922.  According to the historical narrative published by the statistical agency, the first official census was conducted in 1926 and “covered the whole territory of the republic.”  Researchers seeking a comprehensive view of Armenian statistics should consult Statisticheskie publikatsii v SSSR: bibliograficheskii ukazatel [List of Armenian statistical publications found in this guide. Available ONLINE]. 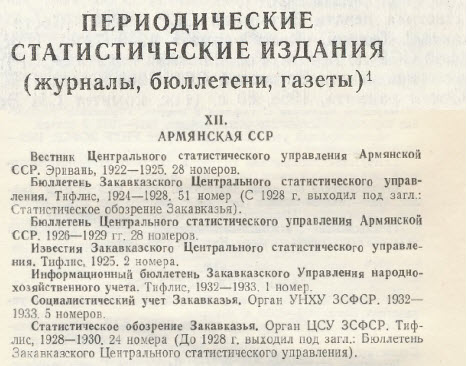 Published in 1975, this guide to Soviet statistics covers published materials for the years 1918-1972. Statisticheskie publikatsii v SSSR: bibliograficheskii ukazatel is organized into the following sections:

As the main governmental body for collecting statistics, the National Statistical Service of the Republic of Armenia is tasked with the following mission:

As of 2013, the National Statistical Service of the Republic of Armenia maintains an extensive catalog of online publications for the years 1993-2012.  Moreover, the entire website supports search interfaces in Armenian, Russian and the English language.  Most of the documents posted by the agency is in PDF format.  Researchers can search and download statistical publications at:

In addition to the searchable database, the statistical agency has uploaded the entire catalog of statistical publications for 2012.  Researchers can access this catalog at: