According to the Oxford English dictionary a Festschrift (plural=Festschriften) is a “collection of writings forming a volume presented to a scholar or savant on the occasion of his attaining a certain age or period in his career.” Festschriften can be useful for biographical research because they often begin with a review of the honoree’s life and career and also may contain articles/memoirs by colleagues or students of the honoree. So, if you come across a citation to a Festschrift, do not overlook it as a potential source of biographical information.

Arranged alphabetically by surname of the honoree, this source also has a subject index in the third volume. This set lists Festschriften published up to 1979. Many emanating from Eastern European countries are included. Unfortunately, the contents of the works are not included, just bibliographic citations. See the entry below for Valerii Nikolaevich Chernetsov.

This two volume set includes citations for Festschriften contained in the collections of the New York Public Library and the Library of Congress including many in foreign languages and many of potential interest to Slavists. Volume 1 is entitled The retrospective Festschriften collection of the New York Public Library: materials cataloged through 1971. Volume 2 is entitled A Dictionary catalog of Festschriften in the New York Public Library (1972-1976) and the Library of Congress (1968-1976). The entries are often very detailed with full contents listing of the articles contained in each Festschrift. The unfortunate aspect of this set is that the citations in the first volume are arranged by main entry (author if there is one, then title, etc.) and not by the name of the honoree. This makes it very hard to find a particular entry. Volume 2 has subject headings and secondary entries mixed in with the main entry citations. See the entry below from volume 1 on Etbin Henrik Costa which can only be found under V for the first word in the title, the main entry in this case, the word Vodnikov. 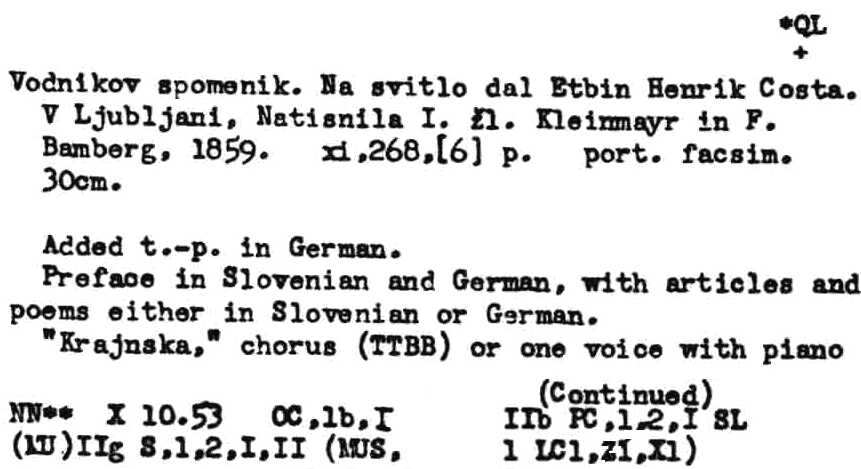