CIA World Factbook. CIA.
Contains very basic, but helpful information about the European Union in general, including legislative information under the “government” heading.

Tracks the European Parliament’s legislative, budgetary, and other activities.

Preferences and Procedures: European Union legislative decision-making. Torsten J. Selck.
An advanced analysis of the EU legislative process, making use of models like computer simulation and game theory. (The cover is for a biological statistics book, but the rest of it is correct!)

EU institutions and other bodies. EUROPA. 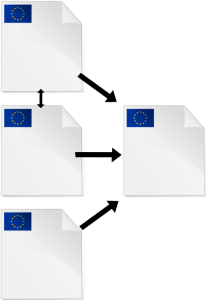 Court of Justice of the European Union.

Archive of European Integration (AEI). University of Pittsburgh.
A large repository of both primary documents and research articles on all facets of European integration and unification. Legislative research may benefit especially from the archive’s Law page.

European Environmental Law Review. 2003-2006.
Provides analysis of European environmental law and its impact on various countries, including the US.

Application of EU Law. EUROPA.
Outlines the methods through which EU law is applied throughout the Member States. A brief but helpful overview.

Researching language and the law: textual features and translation issues. Davide S. Giannoni & Celina Frade. 2010.
Main Stacks 340.14 R311
Though not exclusively concerned with EU law, this book includes several chapter about the European Union and the importance and difficulty of translation in legislative circumstances.