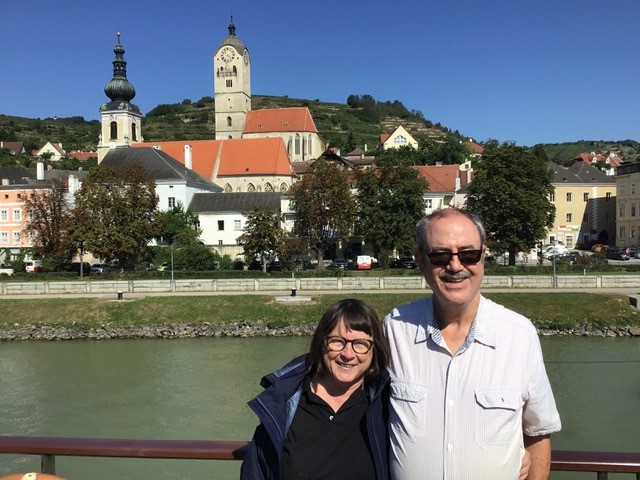 A gift from Richard ’73 LAS and Conna Oram ’72 LAS says much about their personal generosity but also speaks loudly of their ties to each other and to the University of Illinois campus.

Their $500,000 donation to help create a new home to house archives and special collections will name a space that pays homage to their families—The Oram and Judy Families Reading Room.

To understand the family connections, rewind a bit to the days when Richard’s parents, Robert W. Oram, MS ’50 LIS, and Virginia White Oram, MA ’50 LAS, were graduate students on the Urbana campus. Robert would go on to a career in libraries, including as associate university librarian for public services, as well as acting dean of the Library, at Illinois. Both of Conna’s parents—Helen E. Conaway Judy ’33 MEDIA and Bronze Tablet recipient William H. Judy ’35 MEDIA—earned undergraduate degrees in journalism. And although Helen yearned to study librarianship, she downsized that dream, like many women in those days, when family arrived. Instead, she served many years at the Main Library’s circulation desk, where her boss was Robert Oram.

“All four parents were alums,” Richard said. “That’s one reason why [this] gift is so appropriate.”

As a child, Conna became very familiar with the Library, as her mother would often bring her to work. “She loved working there, so the Library was a big part of my life,” Conna said. “I know now that she did it on purpose to give me a love for learning and books.”

Later, Richard and Conna, who both graduated Bronze Tablet at Illinois, would meet as graduate students at Cornell University. Conna became a Latin teacher, while Richard explored library science, ultimately landing as head of library services at the Harry Ransom Center at the University of Texas at Austin.

At Illinois, the Library plans to reconfigure the former Undergraduate Library space into a destination spot for Archives, the Illinois History and Lincoln Collections, and the Rare Book & Manuscript Library. Richard believes a free-standing facility will raise the collections’ profile, drawing more users, providing extra room for exhibits, and offering his families’ reading room “that will encourage scholars from all over the world to use these vast resources.”

The arc of their families’ ties to the Library comes full circle in naming the reading room in their honor. And, adds Conna, she believes her mother, who died when Conna was 19, “would have been thrilled that I married Mr. Oram’s son.”