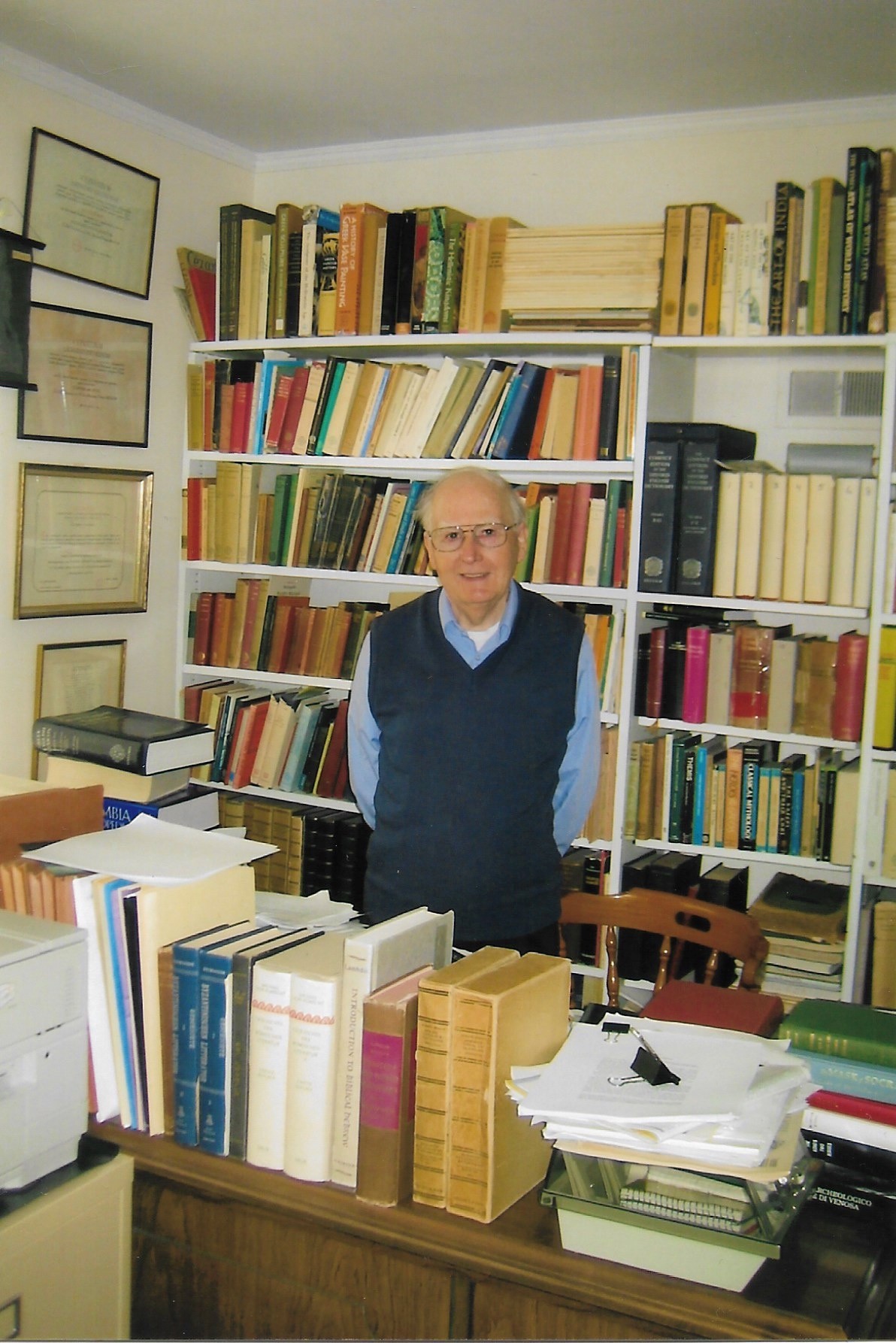 Follow the books in John Kevin Newman’s life, and you’ll find a litany of all that mattered to him.

From texts that brightened his British childhood to a recent endowment to the Classics Library, each tome tells its tale.

“He spent his life reading,” said Frances Newman, PHD ’72 LAS, of her husband’s zeal for the written word. Indeed, from basement to attic, study to back porch, the Newman house stands brimming with books—from the classics to 20th century British novelists, from pieces on art to works in Russian, German, or French.

And like stepping-stones that traverse a pond, books delineate the trajectory that directed the late professor’s life.

STEPPING-STONE ONE: A Child’s World
As an asthmatic youth in Bradford, England, Kevin Newman missed more school than he attended but remained an avid homebound student. “He would go downstairs and sit by the fire,” Frances Newman said, “and there would be a pile of books on either side of the chair. He just would have to reach down, and so he did all his schoolwork.” Newman’s love of the classics was partly spurred by a two-week session on the Greek language, which so enamored him that he tutored himself to a level of excellence that won him a six-year scholarship and admittance to Exeter College, Oxford.

STEPPING-STONE TWO: New Horizons
Having completed a doctorate and 14 years of teaching in England, Kevin Newman looked to the University of Illinois Urbana-Champaign, lured not only by a position in the Department of Classics but by the rich library resources that would be at his disposal. He arrived on campus in 1969 and actively contributed to the scholarly world for the next half century.

STEPPING-STONE THREE: Love Story
Within a year of his arrival at Illinois, Newman’s love of classics took a personal turn when he met and married Frances, herself a classicist who would become a Latin teacher at Urbana’s University High School. Their nearly 50-year marriage produced three children—Alexandra, John, and Victoria—who greatly admired their father’s scholarship. “They would come in from school,” Frances Newman recalled, “peek in the [study] door . . . and knew that he was working on something important.” Each child would go on to earn a doctorate as well.

STEPPING-STONE FOUR: Scholarship Partners
Kevin Newman built a considerable professional reputation, including the publication of The Classical Epic Tradition and books on Latin and Greek poets. His work was handily supported by librarians at the Classics Library, who informed him of new arrivals, pointed out books of interest, and maintained a liberal loan policy. “We had a couple of shelves that were just for the U of I [books], just directly behind his chair,” Frances Newman said. “So all he had to do was swivel around—there was the book.”

STEPPING-STONE FIVE: Full Circle
Upon the passing of their father at age 91 in July, Newman’s children created the John Kevin Newman Memorial Fund (to which their mother contributes). The initiative supports the work of scholars and students in the Classics Library, one of the world’s greatest collections devoted to Greek and Roman antiquity.

“I think this is something that would please him more than anything else,” Frances Newman said of the endowment. “I think he would be absolutely delighted.”

“For him, books were the way ahead.”

For [Newman], books were the way ahead.” ~Frances Newman